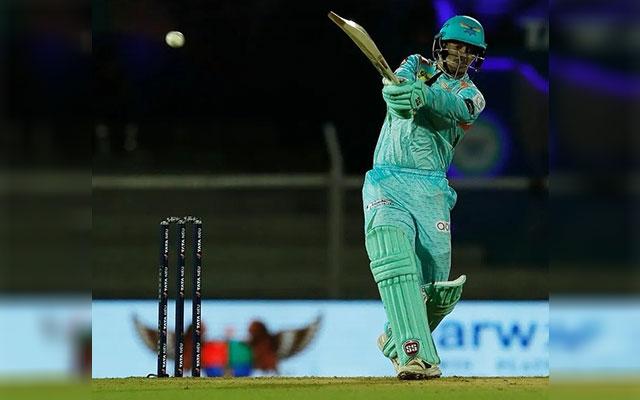 Lewis exploded into action in the last five overs. He and Ayush Badoni, who struck a half-century on debut against Gujarat Titans, blasted 25 runs off the penultimate over bowled by spinner Shivam Dube as Lucknow reached 211/4 in 19.3 overs.

Lucknow skipper KL Rahul had decided to field first as he wanted to avoid bowling in the dew. But when Chennai Super Kings rode on a 25-ball half-century by veteran Robin Uthappa and 30-ball 49 by Shivam Dube, it looked like they had a match on their hands.

But Rahul and Quinton de Kock raised 99 for the opening wicket, which in the end proved a good platform for Lewis (55 of 23), Deepak Hooda (13 off 8) and Ayush Badoni (19 of 9) to guide Lucknow Super Giants over the line for their maiden win in IPL.

Lucknow got off a brilliant start as skipper Rahul and Quinton de Kock raised 99 runs in the opening stand. De Kock struck the first boundary off Tushar Deshpande in the second over and Rahul got into the act in the next over, slapping Mukesh Choudhary for a six from just outside off. On the next ball, he sliced an overpitched delivery over point for four.

De Kock struck Deshpande for three boundaries in an over, while both of them joined forces to hand Mukesh Choudhary the same treatment in the fifth over — Rahul hitting one and his South African partner two fours.

Both were dropped early in their innings — de Kock was given a life by Moeen Ali off Bravo when he was on 13 while Deshpande put down a difficult skier by Rahul.

Rahul (40) was the first to go — caught by Ambati Rayudu off Dwaine Pretorius’ first delivery. Manish Pandey did not last long and when de Kock was out for 61 of 45 deliveries, hitting nine fours, Lucknow Super Giants looked in trouble at 139/4 in the 15th over. With the asking rate climbing up with 56 runs needed off the next five overs.

Deepak Hooda got out for 13 off eight deliveries but Evin Lewis and Ayush Badoni blasted 25 runs off the 19th over bowled by Shivam Dube — Lewis blasting 4, 4 and 6 of the last three balls after Badoni had planted him over the square leg on the first ball of the over.

Lewis then completed his fifty as the West Indies batsman guided Lucknow to victory.

Earlier, defending champions Chennai Super Kings rode on a breezy half-century by veteran Robin Uthappa and a fine 49 by local lad Shivam Dube to post 210/7 in their 20 overs, the fourth time a team posted a 200-plus score in IPL 2022 so far.

Uthappa, promoted to the opener’s slot after they decided to drop New Zealand’s Devon Conway, gave CSK a flying start they were hoping for as he blasted three boundaries off Avesh Khan in his opening over. Though the bowler responded by hitting him on the helmet in that over as Uthappa tried to duck a bouncer, the Karnataka veteran continued in the same vein.

He handled Dushmantha Chameera in the same fashion, hitting the Sri Lankan pacer for a four and six in his first over.

Though Ruturaj Gaikwad failed to click for the second successive match, there was no stopping Uthappa as he completed his 50 off 25 deliveries. He struck Avesh Khan for a six and also despatched Andrew Tye a couple of times to the boundary. Uthappa added 56 runs for the second wicket with Moeen Ali (35), who blasted four boundaries and two sixes during his 22-ball stay at the wicket.

He was out soon after completing his half-century, trapped by young spinner Ravi Bishnoi, the only Lucknow bowler who made an impression on the CSK batters, eventually ending with figures of 2/24 off his four overs. Avesh Khan and Andrew Tye (2/41) and Avesh Khan (2/38) claimed a couple of wickets each.

Dube continued from where Uthappa left off, hitting a couple of massive sixes and five fours, contributing 49 runs off 30 balls as he made the most of batting in his hometown. He added 60 runs for the fourth wicket with Ambati Rayudu (27).

In the end the platform set up by Uthappa and Dube helped CSK cross the 200-run mark with skipper Ravindra Jadeja and his predecessor M.S Dhoni landing a few lusty blows towards the end.