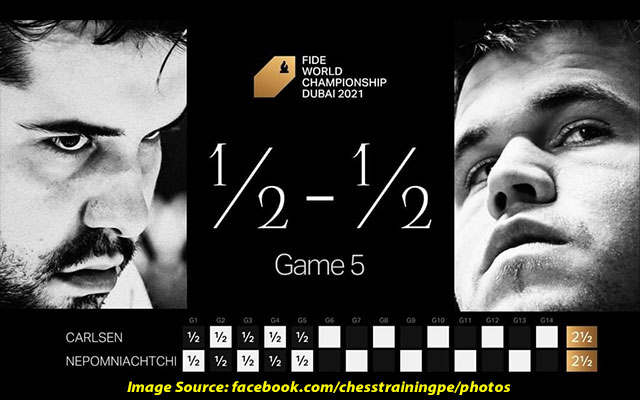 Dubai: On the morning of Game 5, “there is a foreseeable sense of permanent deadlock about the match at this stage“.
Live mood
The ceremonial first move was captured on camera, and as the Minister played 1.c4, there was a moment of anticipation for a new opening from challenger Ian Nepomniachtchi.
Champion Magnus Carlsen was the first to deviate, choosing a new 8th move, but his opponent fired off moves at speed, showing the confident breakaway-train pace that he is famous for but has reined in during the match so far. Although it was hard to read any clear signs of surprise on the champion`s face, Nepomniachtchi raced out to roughly a half an hour edge on the clock, indicating that he was both still in his pre-game preparation and still in control.
Pressure on the champ
Official match commentator, former world champion Vishwanathan Anand, had one of the strongest opinions as Carlsen sank into thought on his 19th move. While there was general expert agreement that Nepomniachtchi had maintained the advantage of the first move, Anand said that not only did he not like the black position, he didn`t think Magnus did either. Drawing on his own vast experience of playing title matches, Anand believes that the nerves never stop jangling in a title match, since there is a constant, growing fear of error, and one misstep could determine the result.
Diminishing returns
The expert consensus was that the beginning of Nepomniachtchi`s deep thinks resulted in a surprising dispersal of his pressure, with commentators pointing to his 20th move as unambitious.
Interest was piqued again as the champion appeared to choose a passive defence, but with precise play, Carlsen erected an impregnable fortress.
To all appearances, Nepomniachtchi had the upper hand in speed, preparation and position today, and even if his superiority was not deadly, it was likely a rare opportunity to have this trifecta in a title match.
When the time control was reached at move 40, the champion was visibly relaxed, and confident that he no longer had anything to fear on the board. After brief reflection, Nepomniachtchi agreed, and initiated a repetition of moves that signalled the fifth consecutive draw of the match.
A new detail
Although the players exchanged a few words after the end of play, for the first time, they didn`t linger and have a longer discussion of the critical points of today’s play. Previous title challenger, US GM Fabiano Caruana, felt that Nepomniachtchi’s reticence and expression as a sign the challenger was angry with an opportunity missed, even if his advantage was very small.

Carlsen for his part, was observed to be “visibly subdued and weary after the game” and confirmed that he had been under more pressure in the endgame than he had anticipated. “The tension is rising, and it’s becoming clearer and clearer that it’s going to be hard for either of us to break through … it’s not easy.” says the FIDE World Championship Website. In the coming days:
After a day’s rest on Thursday, the next block of three games starts on Dec 3. Then Carlsen will have two whites between the rest days, and the colours will have then balanced evenly between the players after eight games.