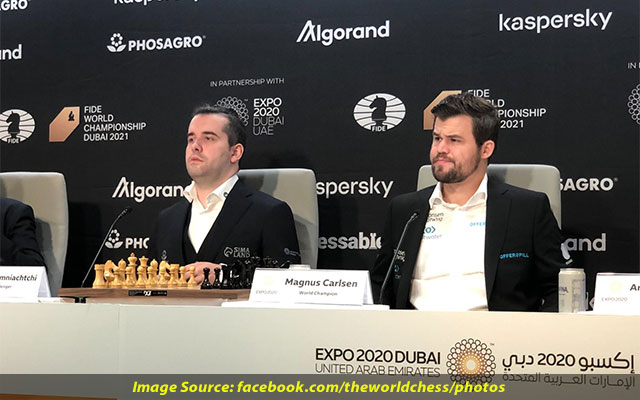 They meet face-to-face when their 14-game duel for the title begins on November 26th. The challenger popped a balloon with white confetti during the opening ceremony, so he gets to play white in the first game.

Andrey Guryev, CEO as well as vice-president of the Chess Federation of Russia (CFR), began by emphasizing the desire to rekindle interest there: “We are trying to increase the popularity of chess among young people, to instil an interest in the game among schoolchildren.”

The Q&A session was then kicked off by panel chairman and match commentator Maurice Ashley.

The session was lengthy and lively, with the players tackling topics ranging from their thoughts on an eventual female world title challenger, the impact of technology on match preparation if online blitz games could provide inspiring new ideas and the extent of their much-discussed friendship.

The players complimented several of the questions, and after a slightly cheeky start, the answers grew more serious and the interplay carefully respectful. Nepomniachtchi’s summary of prior good relations between the two was particularly striking and quotable: “Once you sit at the board, you have no friends.”

The unveiling of the match trophy, an impressive five-kilo cup forged from sterling silver, gold plating, dolerite and obsidian, created by the Chamovskikh Jewelry House, with the support of the Sverdlovsk Region Chess Federation represented by its president Andrey Simanovsky, owner of SIMA-LAND company, concluded the conference.

The design of the cup was provided by FIDE President Arkady Dvorkovich.