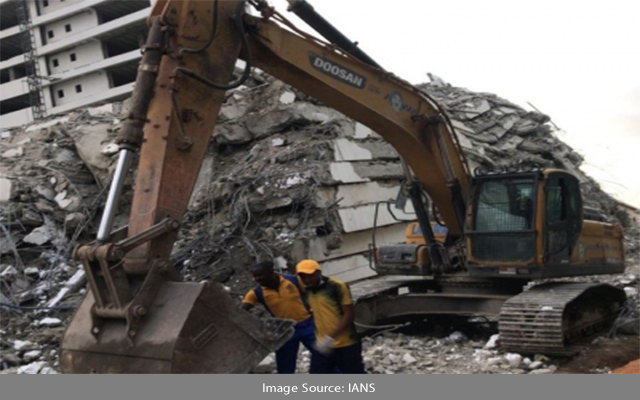 Lagos: Rescuers found more bodies from the rubble of a 21-storey building that collapsed earlier this week in the city of Lagos, Nigeria’s economic hub, bringing the death toll to 38, a top official has confirmed.

State commissioner for information and strategy Gbenga Omotoso told reporters that rescue work was still ongoing and would continue until the government could account for everybody inside the building at the time of the collapse on Monday and certify that nobody was left behind, reports Xinhua news agency.

Omotoso said the retrieved bodies were ready for identification and DNA tests will be carried out for bodies that may be very difficult to identify.

He did not reveal how many people are still trapped under the debris, but said 32 names of those still missing have been submitted to the state government.

The governor of Lagos state has declared three days of mourning for the victims of the collapsed building beginning on Friday, while the investigation into the cause of the collapse is still ongoing.

Local media said the owner of the building did not adhere to building regulations and that the structure was supposed to be only 15 stories tall.