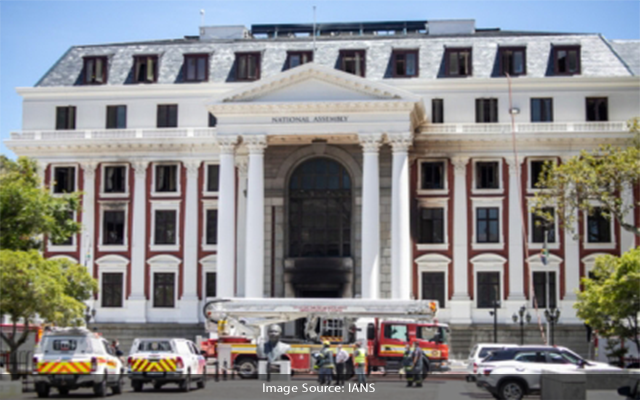 Cape Town: The man who is suspected of setting fire to the South African Parliament, which gutted buildings in the legislative capital Cape Town, has started 30-day mental observation at a psychiatric hospital, authorities said.

In a statement, the National Prosecuting Authority of South Africa (NPA) said 49-year-old Zandile Christmas Mafe appeared at Cape Town Magistrates’ Court on Thursday, and was ordered to be admitted for observation, reports Xinhua news agency.

In Mafe’s second appearing at court earlier this week, it was revealed that he was diagnosed of paranoid schizophrenia after being sent for mental observation by the state on January 3 and the NPA argued for his referral to a psychiatric hospital.

Mafe currently faces charges of terrorism, housebreaking with intent to steal and theft, two counts of arson and possession of an explosive device.

The suspect was arrested on January 2, when the fire broke out, with suspected stealing property after he gained entry to the parliamentary precinct without authorization, according to the police.

The fire lasted more than 70 hours, severely damaging the building of the National Assembly (NA), the lower house, and completely burned down the NA chamber.

It also caused extensive damage to the century-old Old Assembly building that houses the National Council of Provinces, the upper house.

Besides Cape Town, the two others are the administrative capital Pretoria that hosts the national government and the presidency, and the judicial capital Bloemfontein that hosts the Supreme Court of Appeal.