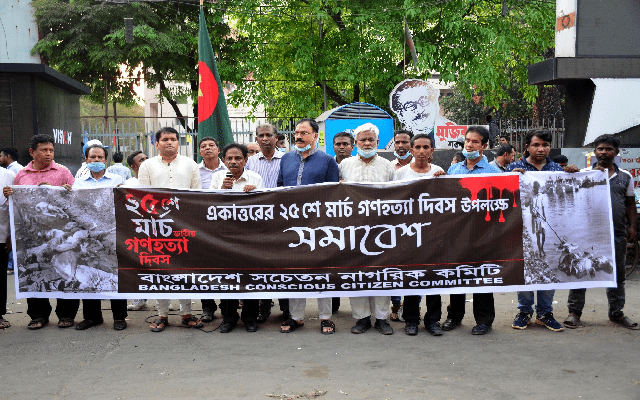 The call for the BCCC protest rally was given earlier in the day.

At the rally, which was attended by a few hundred people, the leaders condemned the massacre in Bangladesh staged by the Pakistan Army on March 25, 1971.

The Pakistan Army turned entire the Bangladesh into a killing field with it’s indiscriminate killing, torture of innocent people and unprecedented scale of rapes for nine months.

That was the kickoff of one of the biggest genocides, led by General Yahya Khan of Pakistan, in the world history causing the biggest ever humanitarian catastrophe after World War II.

They killed 30 lakh people and violated two lakh women and children. Freedom fighters and researchers claim that still, many mass graves in the district and upazila levels remain unidentified.

Leaders and participants of the rally demanded international recognition of this genocide or Operation Searchlight ï¿½ a planned military pacification carried out by the Pakistan Army.

They also demanded apology by the Pakistan government and a trial of the war criminals immediately.