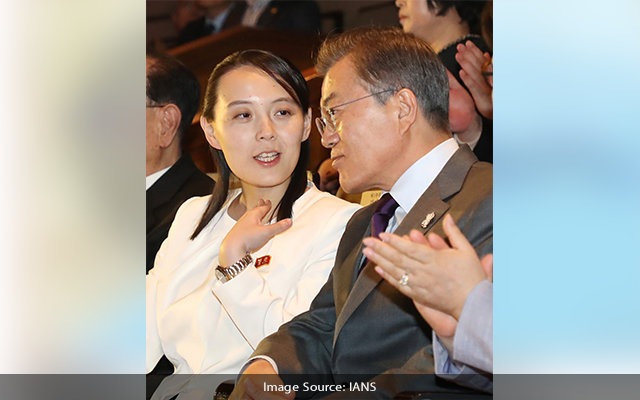 A day earlier, Kim Yo-jong said the North could declare a formal end to the Korean War as suggested by the South and even discuss holding an inter-Korean summit if Seoul treats Pyongyang with “impartiality” and mutual respect, reports Yonhap News Agency.

The statement, carried by Pyongyang’s official Korean Central News Agency, came a day after Kim said South Korean President Moon Jae-in’s recent proposal to declare a formal end to the 1950-53 Korean War is an “admirable idea” and the North is willing to discuss improving inter-Korean ties if Seoul ceases to be hostile toward it.

“Our assessment is that the statement that the North can address one by one various issues for improving inter-Korean ties through constructive discussions is meaningful,” the Unification Ministry said.

“Given that for such discussions, it is important to have smooth and stable communication between the two Koreas, the inter-Korean communication lines should first be swiftly restored,” it added.

The Ministry also voiced expectations for the two Koreas’ authorities to resume dialogue so they can discuss solutions to pending issues while ensuring the situation on the peninsula remains stable.

The South Korean presidential office Cheong Wa Dae is yet to make a comment on Kim Yo-jong’s remarks.

“We are cautiously reviewing the content of the statement,” a presidential official said.

“The government has maintained a consistent position for the restoration and development of inter-Korean relations.”