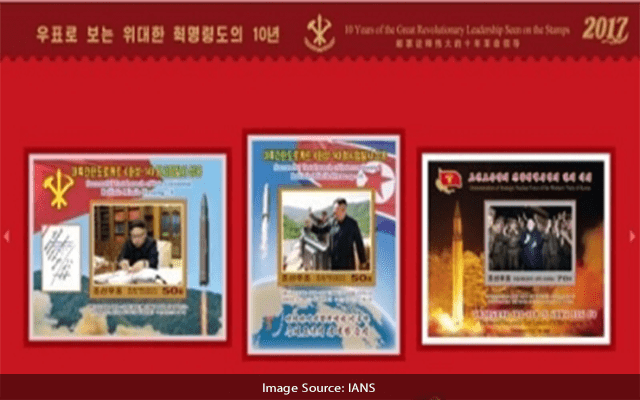 Seoul: North Korea on Friday released a new collection of commemorative stamps for the 10th anniversary of leader Kim Jong-un’s rise to power with photos of his meetings with world leaders, including former US President Donald Trump.

The 49 sets of stamps, published by the North’s Korea Stamp Corp., include those featuring Kim’s Singapore summit in 2018 with Trump and another meeting at the inter-Korean truce village of Panmunjom the following year, as well his talks with Chinese President Xi Jinping and Russian President Vladimir Putin, Yonhap News Agency reported.

But no stamps on Kim’s summit talks with South Korean President Moon Jae-in or a trilateral gathering with Trump at Panmunjom were featured in the collection.

The North introduced the test-firing of its missiles in the stamp collection, including the Hwasong-14 and Hwasong-15 intercontinental ballistic missiles (ICBMs) launched in 2017.

Images of the newest Hwasong-17 ICBM the North claims to have launched last week were not included in the collection.

Inter-Korean relations have thawed and the peace process has stalled since the no-deal end of the 2019 Hanoi summit between Kim and Trump.