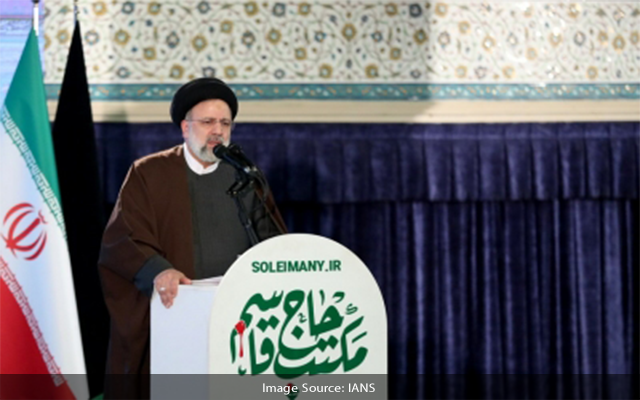 Tehran: President Ebrahim Raisi has said that Iran seeks to promote the relationship with its northern neighbour Azerbaijan.

Ties between Iran and Azerbaijan are based on the beliefs of the people of the two countries and have been established throughout history, Raisi made the remarks on Wednesday during a meeting with visiting Azerbaijan’s Defence Minister Zakir Hasanov, according to Iran’s presidential website.

The policy of the Islamic Republic is to boost cooperation with its neighbours, particularly with Azerbaijan in the Caucasus region, Raisi said, adding that his country is ready to provide technical and engineering support to Azerbaijan, Xinhua news agency reported.

For his part, Hasanov described his talks with Iranian officials as “useful, fruitful and path-breaking” for the future of cooperation, according to the website.

Thanks to historical and cultural commonalities between Iran and Azerbaijan, the two neighbours should develop relations and reinforce cooperation in defence and security sectors, Iranian Defense Minister Mohammad Reza Ashtiani said following meetings with his Azerbaijani counterpart Zakir Hasanov.

“Given their place and special geopolitical features, the two countries have great capacities and opportunities for the enhancement of relations in all fields,” Ashtiani added.

For his part, Hasanov expressed gratitude to the Iranian government for supporting Azerbaijan’s territorial integrity.

Heading a high-ranking military delegation, he had arrived in Tehran on Tuesday.