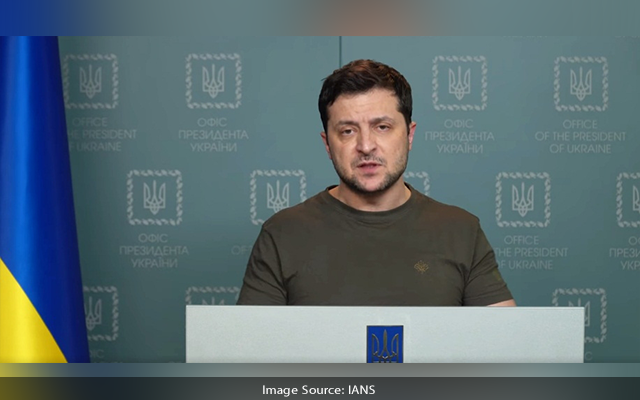 Kiev: In a virtual address to thousands of protesters across major European cities, Ukrainian President Volodymyr Zelensky said that if his country fell to Russia in the ongoing war, then the whole continent of Europe will fall.

On the night of Friday March 4, protests against the ongoing Russian military assault on Ukraine took place in Vienna, Tbilisi, Prague, Frankfurt, Vilnius, Lyon and Bratislava.

Earlier on Friday in another video message reportedly from his office in Kiev, the President condemned the NATO leaders for failing to establish a no-fly zone over Ukraine, the BBC reported.

“The NATO summit took place today. A weak summit. A confused summit. A summit that shows that not everyone considers the fight for freedom for Europe the number one goal.

“All the intelligence agencies of the NATO countries are well aware of the enemy’s plans. They confirmed that Russia wants to continue the offensive.

“This is the self-hypnosis of those who are weak, insecure inside, despite the fact they possess weapons many times stronger than we have,” the President added.

As the conflict in Ukraine entered the ninth day on Friday, Aleksey Arestovich, an adviser to Zelensky, said that resistance by the Ukrainian armed forces as well as by the general public would “grind down the Russian war machine”.

“The Russian army is not strong. It’s just big,” the BBC quoted Arestovich as saying in a Facebook post.

“Our success is a pattern, with specifically built and clearly implemented cause-and-effect relationships… Eight-tenths of Putin’s army is here. This is where we will bury them,” he added.

Since Russia’s invasion began on February 24, Ukrainian forces have continued with a stiff resistance against Moscow’s advances.

However, Russian troops on Friday captured the the Zaporizhzhya nuclear power plant, the largest in Europe, where a fire had erupted earlier in the day due to shelling.

The previous day, the port city of Kherson was also seized by Russian forces, becoming the first city to fall.

In the south, Russian forces captured areas along the Black Sea coast, and the port city of Mariupol remained surrounded.

In Kharkiv, the country’s second largest city, has also remained under siege.