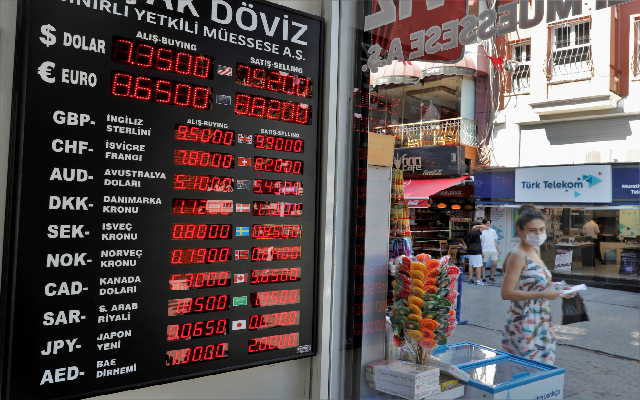 Istanbul: Turkish citizens are having increasing difficulties coping with the rising prices of almost every item amid high inflation and the national currency depreciation.

Turkish currency lira has lost about 40 per cent of its value this year against the US dollar, while the annual inflation hit almost 20 per cent in October.

The currency tumbled to a fresh historic low against the greenback on Tuesday, and one dollar was traded at 13.50 liras.

Grocery stores, shops and supermarkets in Turkey’s biggest city Istanbul have been continuously reflecting the losing value of the lira to the prices, partly with psychological motives, Xinhua news agency reported.

“The other day, I walked in a store that sells underwear products. The price of one pair of underpants went up to 50 liras ($4) from 25 in less than two weeks,” Filiz Ertekin, a 77-year-old retired Istanbul resident living in the Asian side Kadikoy district, told Xinhua.

The seller said she should not delay her purchase and that the price of the same product would be even more expensive next week.

“Turkey is experiencing a problem of changing the price tags due to the increase in costs mostly brought about by the increase in gasoline prices,” Mustafa Sonmez, an economy writer, told Xinhua.

Turkey raised the gasoline prices on Wednesday midnight for over 1 lira per litre.

In Sonmez’s view, some parts of the price increases are “psychological” as everyone is trying to protect themselves.

“It’s a chain reaction with sellers trying to boost the price of goods and services used in everyday life by saying that the price of everything is increasing somehow,” he said.

Meanwhile, some quotas have been imposed on the sales of some products, such as sunflower seed oil, sugar and Turkish coffee.

“I am afraid this whole process will lead to stocking with the growing speculations,” said a grocery store owner in Istanbul’s crowded Besiktas district.

“Neighbours are telling each other to buy extra packs of toilet paper as new price hikes are expected.”

For Sonmez, political stability would be the key to taking the price hikes under control.

“Otherwise, it would continue as long as the element of trust is missing,” he added.

Meanwhile, heating in the winter months has become quite costly with the soaring costs of natural gas.

Turkey raised the price of natural gas used by power plants and industry by nearly 50 per cent in early November, leaving the consumer gas prices intact.