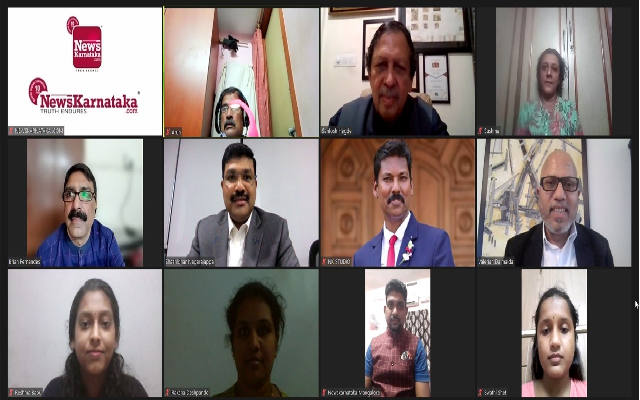 During the prefatory and welcome remarks, Director of Spearhead Media, Canute J. Pinto said, “we are in our 10th year, and we can proudly say that News Karnataka is one such company which is truly a people’s corporate. We act as per our tagline, Truth Endures. Through the programme, we have touched the banking sector, journalism and now we are here with Santosh Hegde who will throw a light on “Social Values & Media.” Further, he also introduced the guests of the event.

While delivering the keynote address on ‘Social Values & Media’ Santosh Hegde said, “Society has forgotten the social values, the parents are failing in inculcating the moral, social values among the children. In the olden days the person who went to jail was boycotted from social life but today a powerful person released from jail will be welcomed with garlands and procession. Here we find the great collapse of the values. If we don’t change people in society, nothing will change and it will adversely affect everyone. Corruption is not only confined to just one thing, but it is there in all the other sectors. In 1985, if one paise was given only 15 % reached people. It hasn’t changed to date. The country would have developed way more than how it is now.”

Santosh Hegde observed, “All the 4 pillars of the constitution are now corrupted in the legislature. Many leaders are looting public money, in executive, many aspirants are getting a job by giving bribes whereas the judiciary is delaying its judgement. The last one is media, and it is called the watchdog of the society but today even the media is running behind the money and bringing out the evil called paid news concept. The only solution for this is bringing back the values, contentment and humanism.”

Further, he recalled some incidents that happened during his career. “In 2009, an old lady came to me saying that she had no income. Her son sent Rs. 250 per month and the postman asked her for 10% of that which is Rs 25. The problem was solved when I informed the Lokayukta police but the sad part is until the truth was unearthed, the person remained there for really a long time.”

Delivering a special message Shashidhar said, ”we can transfer our culture and tradition only through our mother tongue. We can face or win the world only by furthering our language. There are 3 types of values external values, internal values and defective values. Today media is creating sensationalism rather than maintaining sensitivity. It repeatedly telecasts negative news which adversely affects the society and younger generation. He said his father was primary school headmaster, and hence once when there was a visit by BEO to the school, he bought five apples and kept them in the house. The next day morning he saw someone had bitten the apple. His angry father called all his 3 children and ordered them to eat the apple like wild animals. He said that from that incident, he learnt never to touch others’ belongings then on.

The talk was followed by a question and answer session moderated by Canute Pinto. Rajesh Sequeria asked the question regarding educational qualification for politicians to which Santosh Hegde answered Education is not necessary in all walks of life, especially formal education. Instead, we need to inculcate values right from childhood. Value is a necessary thing in society and it is our duty that we contribute to the change. Again when Rajesh asked him whether he was interested in politics, Santosh Hegde replied that I am not going to be a politician. Somebody should be there to point out the mistakes and I have no intention to join any party. I have done my part in contributing to the society through my service, and I am satisfied.”

Viewer Siddalingesh asked regarding the inclusion of values in the education system for which Santosh Hegde replied that of course, the education must include values, however, the inculcation of values must start from home itself so that we can bring both domestic and social change.

One of the staff raised the question regarding what is humanism according to Hegde. “Even in your worst times if you think of others it is real humanism,” he said.

Another viewer Amjad asked in present India everything is overlapped with religion, and in this case, what will be the future of the country. Santosh Hegde in his answer said that religion must be restricted to homes, and should not be dragged into the administration.

President of the event and Mentor of Spearhead Media, CA Valerian Dalmaida in his presidential address said, “I lost my mother in 2019 at the age of 90 but I always remember the values that was taught by my mother. If you can’t do anything good to others, do not do bad either, just stay quiet, she had said. In 2016, when we were celebrating our 4th anniversary Santosh Hegde was the Chief guest. Hegde as well as Harekala Hajabba and other guests shared the points regarding the values inculcated by their parents. We here at our media house too are focusing on bringing to the fore the neglected and downtrodden class of the society, he added.

The vote of thanks was delivered by the Director of Spearhead Media and Master of the Ceremony Brian Fernandes. In his remarks, he said that if we don’t spread the right values we will land up in problem, and hence dissemination of the right values is important.