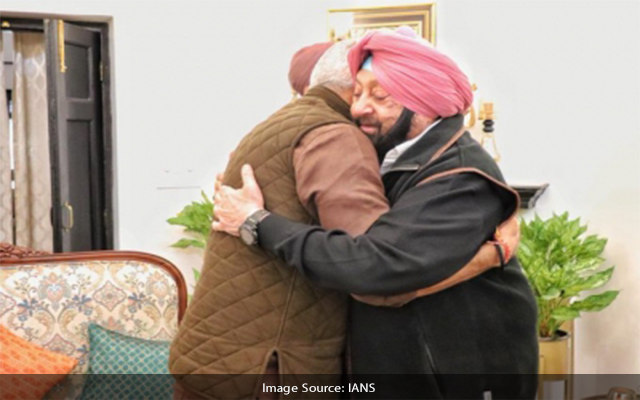 “Met union minister & @BJP4India incharge for Punjab, Shri @gssjodhpur in New Delhi today to chalk out future course of action ahead of the Punjab Vidhan Sabha elections. We have formally announced a seat adjustment with the BJP for the 2022 Punjab Vidhan Sabha elections,” the former Congress leader and two-time Punjab Chief Minister said in a tweet, after meeting Union Minister Gajendra Singh Shekhawat, who is also the state BJP in-charge.

After meeting Shekhawat, Singh said: “Our alliance is confirmed. Only seat-sharing talks are going on. We will see who will contest which seats and winnability is sole criteria for deciding seats.

“We will support the BJP wherever it will contest… and it will support us on the seats we will be contesting. We are prepared and will win the election… 101 per cent sure of winning the election. We are not in contest with anyone,” the former Punjab chief minister said.

“After seven rounds of talks, today I confirm that BJP and PLC are going to fight the upcoming Punjab Assembly elections together. Seats-sharing and other things will be decided later,” Shekhawat said after meeting.

Later, the former Punjab chief minister tweeted photos with Shekhawat, and said: “Met union minister & @BJP4India incharge for Punjab, Shri @gssjodhpur in New Delhi today to chalk out future course of action ahead of the Punjab Vidhan Sabha elections. We have formally announced a seat adjustment with the BJP for the 2022 Punjab Vidhan Sabha elections.”

See also  JD-S will not ally with BJP for Karnataka council polls: Kumaraswamy

Shekhawat also tweeted a picture of the meeting with Singh. He said, “Captain Amarinder Singh, former Chief Minister of Punjab and founder of Punjab Lok Congress, today visited Delhi residence. His long political experience is reflected in discussions. His priority is interest of the people of Punjab. We had a pleasant exchange of views in this regard.”

In another tweet, Shekhawat said: “I have a special respect for Captain saab. The top leadership of BJP has already indicated that we are going to fight elections together.”

The election in Punjab is expected to be held in February-March next year along with the Uttar Pradesh, Uttarakhand, Manipur and Goa.

Earlier, after its alliance broke up with its oldest alliance partner, the BJP has announced to contest all the 117 assembly seats in Punjab.

In 2017, the BJP had won three seats out of the 23 it contested. A senior BJP leader said that alliance with the former chief minister’s party will definitely help the party.

“Singh is a big name and has an impact on state politics. An alliance with him (Singh) will surely benefit the BJP in upcoming assembly polls,” a BJP leader said.