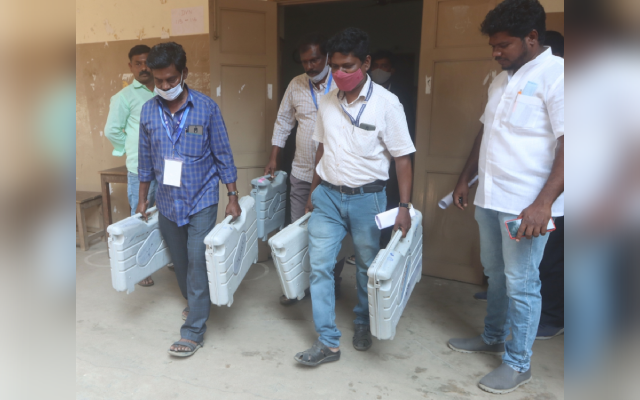 Chennai: With the indirect election to the mayor and deputy mayor candidates taking place on Friday March 4, the DMK alliance has chosen people from diverse backgrounds as mayors.

While the DMK is contesting for 20 of the 21 corporations for the seat, the one seat left has been given to its alliance partner Congress in Kumbakonam.

In Kumbakonam which is a newly formed corporation upgraded from municipality status, the mayor candidate is an autorickshaw driver and Congress city unit president K. Sarvanan (42).

He will become the first mayor of the Kumbakonam corporation after it was upgraded into a corporation on December 20, 2021. Saravanan is a school dropout and educated only up to class VI and drives an auto for a living.

Saravanan, while speaking to IANS, said: “The Congress has given me a great honour by making me the mayor. Will always be indebted to the party and the TNCC leadership for this. As usual, I will always be with the people to wipe out their worries and tears. Will be available 24X7 to the people of Kumbakonam.”

In Coimbatore where the DMK is winning the administration of the Corporation for the first time, party has fielded a first time councillor, Kalpana as the candidate which came as a surprise to many. Kalpana who comes from a very humble background went by bus to meet M.K.Stalin in Chennai.

DMK spokesperson Tamilan Prasanna, while speaking to IANS, said: “By choosing an ordinary person like Kalpana who comes from a humble background, our president Stalin has given a clear message that the party is with the poor and the downtrodden. However, our leader has ensured that the candidates are well educated and have good ideas for running a corporation.”

He said that the party president was keen that first-time councillors, educated people, and youngsters are given opportunities to groom the party to the next level in the coming years. “Of the 35 DMK candidates for mayor and deputy Mayor post, 30 are either graduates or postgraduates”.

It has also chosen a software professional for the mayor’s post in Kancheepuram where it zeroed in on Mahalakshmi Yuvaraj. Mahalakshmi was a software engineer with the blue-chip company, Infosys and she quit the job and plunged into politics and party president chose her to be the mayor of Kancheepuram corporation.

Mahalakshmi, while speaking to IANS said: “It is a pleasant surprise that party president Stalin has chosen me. I am a first-timer and will do my best to uplift the corporation to the next level with the support of my fellow corporators and the government of Tamil Nadu and opposition parties. ”

The DMK also chose an Australian educated Post Graduate N. Dinesh for the post in Tiruppur. He is also a first-time councillor.

The first mayor of Tambaram corporation, which was upgraded into a corporation recently, is 25-year-old B. Tech Chemical Engineering graduate, Vasanthakumari Kamalakannan who is from the Dalit community. Interestingly, DMK has reserved the adjoining corporations of Chennai and Tambaram for Dalit women candidates.

While speaking to IANS, Vasanthakumari said: “I am thankful to our leader Stalin for choosing me to the post of Tamabaram corporation mayor. My first priority is to sort out the drinking water issues plaguing the corporation.”