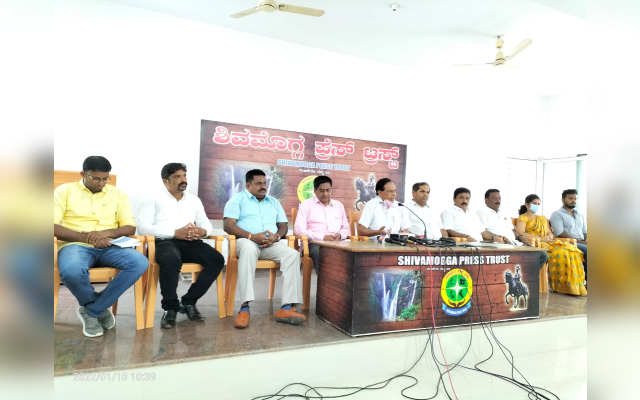 Shivamogga: Karnataka Government should hand over Nandita sucide case to CBI, and also Home Minister Araga Jnanendra should resign, said Former Minister Kimmane Ratnakar, and added that he would go on fasting on January 30, if demand remains unfulfilled.

Speaking to mediapersons at Shivamogga on Monday January 10, he said that, “during my tenure as Home Minister some BJP leaders including Araga Jnanendra demanded for CBI investigation on unusual death of Nandita. Araga Jnanendra a communal Home Minister tried to suppress me using Nandita case. Araga projected that case as rape and murder which lead for communal dispute. He ruined Krishna Pujari’s family and marred my name for his political existence, he asserted.

Stating that now Araga Jnanendra himself is a Home Minister, and that he can hand over this case to CBI, he said that Jnanendra has alleged that I am interfering in the matter. After the death of Nandita in 2014 Araga Jnanendra conducted some rituals only for 3 years but soon after his victory he left behind these practices. In 2018 Union Home Minister Amit Shah who met Nandita family recommended the case be handed over to CBI, he said and challenged that now the case should be handed over to CBI. If CBI comes out that I am at fault, I will definitely take retirement from my political career or else Jnanendra should resign if the CBI does not give a report in next six months. They have misled the people, he asserted.

Chief Minister Basavaraj Bommai should take action against Araga Jnanendra and he must be dismissed from all the posts. And also Forest Officials of Theerthahalli are exploiting Congress men on the instructions of Home Minister, he alleged. To oppose this action, we will launch protest march from Guddehalli to Forest Office, Theerthahalli. He further said that I have the same opinion that Gandhiji had regarding Conversion. Gandhiji had harmonious view regarding conversion.

Araga Jnanendra has violated all covid regulations. He gathered lakhs of people and participated in various functions in Theerthahalli. This indicates Covid ruler are different for Home Minister and public. Is that true, he questioned.