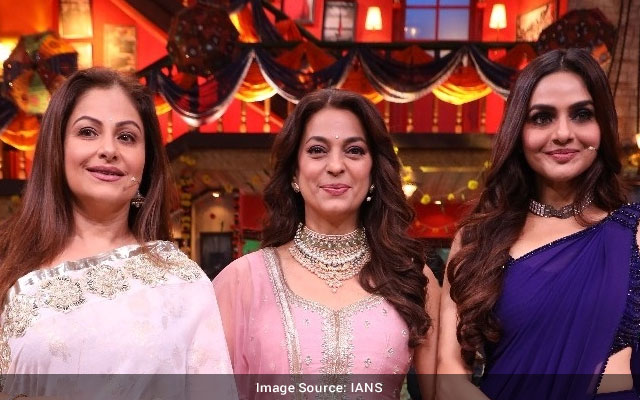 Mumbai: Bollywood actresses Ayesha Jhulka, Juhi Chawla and Madhoo will be seen as special guests on ‘The Kapil Sharma Show’

In conversation with his guests, host Kapil Sharma asked Ayesha Jhulka about the time she was working without rest for eight days straight! The actress was surprised to learn that the host had knowledge of this, “How do you know about this? This is a very specific, and secret thing”. The host said it was his love for the actress that made him research about this period.

The actress replied. She shared her experience of travelling to Chandivali, Mumbai for shooting. “I remember I was working on two films. I said we would work on three shifts, four shifts, two shifts. So, I was shooting for the film ‘Khiladi’, in the day, in Natraj Studio. I had a full night shift in Chandivali for the film ‘Balma’. On both sides, the choreographers were like terrors.” Also, Choreographer Chinni Prakash, as mentioned by the actress, was a tough taskmaster.

Ayesha said: “I used to always be afraid of him, of Chinni sir. And the fact is that for most of my films I have worked with him! And I remember back in those days my makeup was so loud for ‘Khiladi’ but for a rain sequence it was light. So removing that makeup then putting on another type of makeup in 14-15 minutes, I would do all of this in the car because I used to always be late, reaching Chandivali. I am really surprised that you know about this because I will never be able to forget those days.”

She further added: “I also remember, Chinni Ji, Akshay, whoever was on set used to say drink soda and milk or Thums-up and milk, something like that and you’ll be wide awake for the shooting at night. Or you put soda on your face, let it go into your eyes. This was how they would advise me, my co-stars and choreographers and all. And I used to also follow it genuinely so that I try to stay awake.”