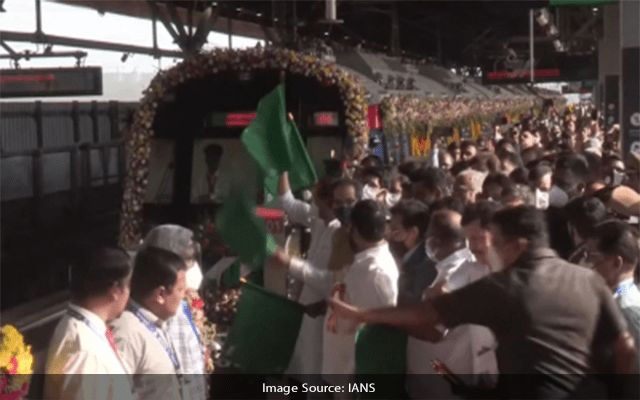 Mumbai: Flagging off the two new Mumbai Metro corridors — Line 2 and Line 7 — Chief Minister Uddhav Thackeray on Saturday April 2 slammed the Centre for creating obstacles on projects related to Mumbai, and questioned the utility of the upcoming bullet train project.

While the Centre is eager for the bullet train project, it has taken over the land intended for the International Finance Centre in the prime Bandra Kurla Complex, he said of the pet project of Prime Minister Narendra Modi.

“If you have love for Mumbai then why don’t you give us the Kanjurmar (salt-pan) lands for the Mumbai Metro Rail project? Railway land is not being transferred for the Dharavi redevelopment project, land is not being given to us for a pumping station,” Thackeray said here.

He added how Maharashtra contributes the highest amount of GST in the country, yet the state’s dues are still not cleared on time.

“We are not begging, we are only firmly demanding our share of the taxes, but it is being consistently denied to us,” rued the CM.

Taking a swipe at the state Bharatiya Janata Party leader who accused him of claiming credit for the two new lines of Mumbai Metro, Thackeray retorted saying if they had so much concern for the city, then why are roadblocks being created for the state’s important infrastructure projects.

Earlier, Thackeray flagged off two new Metro Line 2A and Line 7, both in the suburbs – on the auspicious occasion of Gudi Padwa, the Maharashtrian New Year.

The two new lines shall start operations daily 5 a.m.-11 p.m. from tomorrow (Sunday) for commuters, with fares ranging from Rs 10-Rs 40 for the air-conditioned rides at speed of around 70-kmph, said MMRDA Commissioner S.V.R. Srinivas.

Though the trains are equipped to operate with a driverless system, initially they will be operated by a contingent of around 60 male and female drivers.

The development came after nearly 11 months of trial runs on these 2 lines since May 2021.

It maybe recalled that the city got the 11.50 km long Mumbai Metro One – its first and only so far – elevated line on June 8, 2014, linking Versova-Andheri-Ghatkopar in the east-west direction.

The Line 2A and Line 7 were sanctioned in October 2015 and Prime Minister Narendra Modi laid the foundation stone during the erstwhile Bharatiya Janata Party-led government of the (then) Chief Minister Devendra Fadnavis.

The entire corridors of the two new lines are expected to be ready in the next five-six months, officials said.