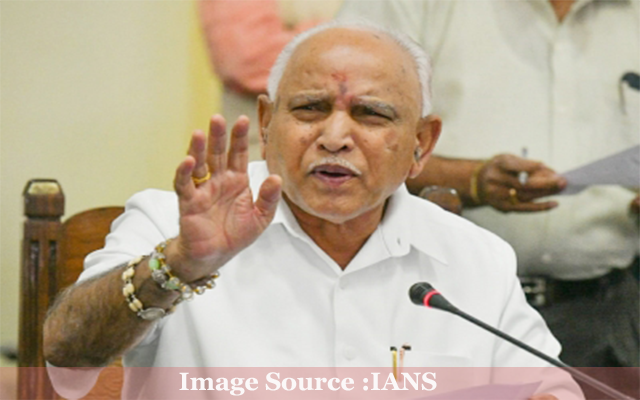 Vijayapura: Taking a different view from that of his party colleague and BJP State President Nalin Kumar Kateel who recently called Congress Leader Rahul Gandhi as a drug peddler, Former Chief Minister B. S. Yediyurappasaid that Kateel should not have made such a comment.

Speaking to media persons at Moratagi Village of Sindagi Taluk before addressing public rally as part of ongoing byelection campaign here on Wednesday October 20, Yediyurappa said that he would speak to Kateel to know in what context he made such a comment against Rahul Gandhi. “I respect Rahul Gandhi as he enjoys his own dignity and reputation. Therefore no one should make such comments that disrespect leaders such as Rahul Gandhi. There is no need to make such statements at all,” he said.

It may be noted that the Congress has taken serious note of the statement of Kateel and said that he has lost mental balance, thus he should be admitted in a mental asylum.

Replying to the question on Congress and JD (S) raising RSS issue in the campaign, Yediyurappa said that there is no need to drag RSS in the election as it has nothing to do with the polls.

“If the JD (S) or Congress think that they will gain political mileage by bringing RSS into the campaign, then they are only dreaming. People are aware of their motives and they will not succeed in their efforts,” Yediyurappa added.

Claiming that the voters are with the BJP, he said that they will give a fitting reply in the polls to all such statements made against the RSS.