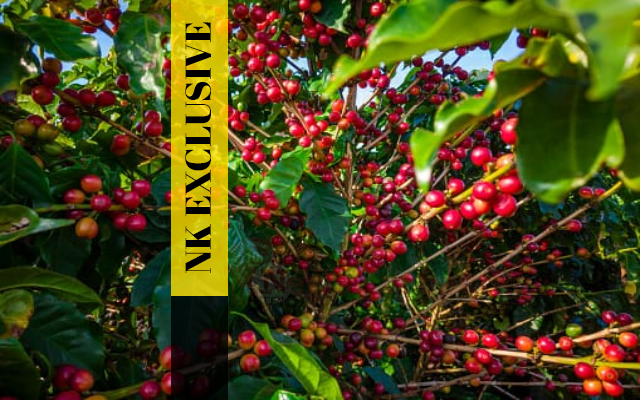 Kodagu: The price of Arabica coffee has been decreasing since a week, an effect of ongoing Ukraine-Russia war. The coffee industry is already under trouble owing to increased production cost and adverse climatic conditions and price fall in recent years.

Amid trouble the Arabica growers in the country have a reason to cheer since three months as the price of Arabica parchment coffee has jumped nearly 25 to 30 percent. This price hike is due to snow fall in Brazil, the largest Arabica coffee producing country in the world. During November last a 50 kg Arabica Parchment was being sold at Rs 11,700-11,800. Then the price jumped to Rs. 16,100-16,200. Since a week the price came down to Rs 15,600 -15,650 that has gotten coffee growers worried. State accounts to 70 percent of Coffee production of the country, while a tiny district Kodagu alone have 30 percent share in country’s production. The price of Arabica cherry also has decreased to Rs. 7700 from Rs. 8000. The price of Robusta parchment and Robusta cherry also came down 2 to 5 percent in Chikkamagaluru and Kodagu markets.

Though the main reason for  price slump is Ukraine-Russia war, both are importers of Indian coffee. According to Coffee Board  data, India exported 6604 metric tonnes of green bean, instant and fried coffee to Ukraine from April 1, 2021 to January 31, 2022. During 2018-19 financial year, Indian exports to Ukraine was 7327 metric tonnes.  During last financial year Russia imported 23,519 metric tonnes of Coffee from india.

Among 11 countries union of Commonwealth of Independent Countries, Russia accounts for 74 percent of Indian imports while Ukraine accounts 20 percent. Though the main reason for price fall is not
stalling of exports to both countries says market experts. The uncertainity and fear in European markets about war impact is the prime reason for price fall.

Coffee is lifeline of Kodagu and Chikkamagaluru Districts in South Karnataka and nearly 3 lakh families are dependent directly and indirectly on coffee industry. If the war continues the price fall of Coffee is evident and increase in price of petroleum products, metal and cooking oil would badly impact the growers.