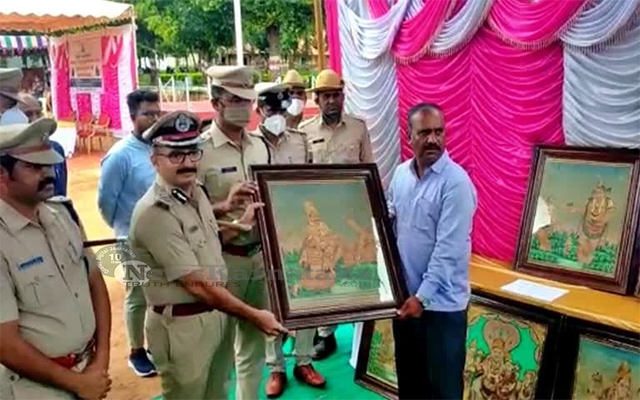 Mysuru: Mysuru Police have arrested a textile shop owner and his friend on charges of stealing valuable artefacts from Srirama Mandira and library in Chandagal Village of KR Nagara Taluk in the District.

A textile shop dealer who was unable to pay the rent of the shop owing to Covid hatched a plan to steal artefacts along with his friend. Thus, the duo stole 10 artefacts from Srirama Mandira.

The accused put up artefacts on auction online through a website. The accused informed that the artefacts were found while levelling his house. When each artefact was bid for Rs 4.5 lakh an informer alerted the police. The police under the guise of buyers  contacted the accused and
apprehended the duo.

IGP (Southern Range) Praveen Madhukar Pawar handed over the artefacts  to Srirama Mandira and library staff on Tuesday November 23. The temple staff said that these works were presented by the Maharaja of Mysuru to Srirama Mandira more than a hundred years ago.

Police have not revealed the names and other details of the accused as the case is still under investigation.