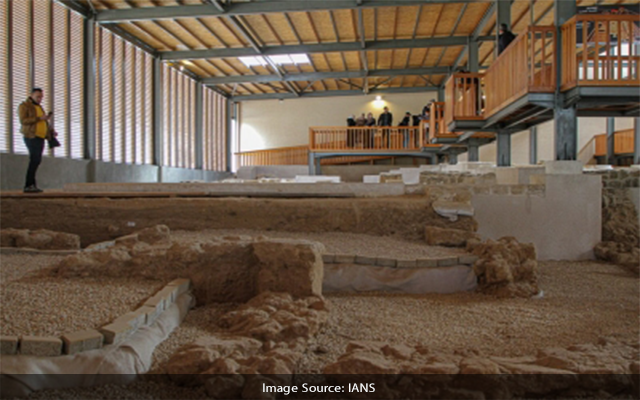 Gaza:  In the Jabalia refugee camp in the north of the Gaza Strip, an ancient Byzantine church, which has been reconstructed into a public meseum by the Hamas-run Ministry of Tourism and Antiquities, has been opened.

Established 1,700 years ago as a royal property, the emblematic church was uncovered in 1998 when Gazan workers were rebuilding a key highway that spans the entire Palestinian enclave from the north to the south, according to Nariman Khella, an official at the ministry, Xinhua news agency reported.

In addition to coins and pieces of pottery, graves of emperors and church goers were found at the site which was opened on Monday, Khella told Xinhua.

The restoration of the historic church, however, had met numerous failures amid rounds of fighting between Israel and the Palestinian militants in Gaza, until Premiere Urgence, an international NGO, in 2018 launched, in partnership with the Palestinian cultural authorities, a funded programme that aims to preserve and promote cultural heritage in the Gaza Strip.

“The programme assigned a group of students studying archaeology to the restoration work of the church. They restored and polished dozens of ancient mosaic portraits on the floor of the church,” Khella said.

International experts also came to Gaza to train their local counterparts in managing and protecting the church before and after completion of its restoration.

This church covers an area of 850 square metres and has a total of 400 mosaic images on the floor, said Jamal Abu Rida, another official at the ministry, hoping such archaeological sites could revive domestic tourism in the Gaza Strip which is considered an important regional trade corridor in history.

If calm would prevail in Gaza, foreign tourism could also revive, he added.

“There is no doubt that Christians around the world love to visit their ancient churches and get to know their places, and we hope that will happen one day,” the Palestinian official said.

Home to more than 2 million people, the Israel-blockaded Gaza Strip is one of the oldest regions known to history as Arab merchants used to visit it for trade.